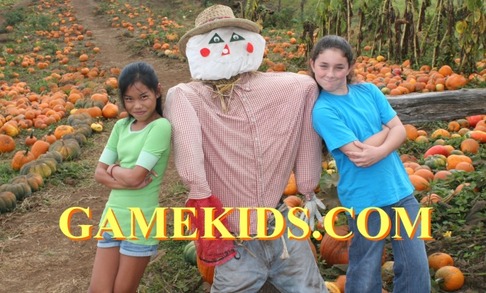 A New Kind of Bobbin
I've a game that's certain to bring lots of laughs. The youth group at my church did it one year just for the fun of it. You've heard of bobbing for apples, right? Well, instead of apples, get a larger tub and bob for spam. That's right, spam. It's much more fun because spam sinks and by the time you get to the last few people the water is slimy and gross and the spam is starting to fall apart. Teenagers love this game!    -Audra K., Jefferson City, MO

Murder in the Dark
There is a very fun game that you can play with kids from the ages 7-13 with five or more people. You need a deck of cards. Remove an one card for each person, but there must be only one ace, one jack, and one queen. The rest of the cards may be any number. Shuffle the cards you have removed and pass one out to each person. The person who gets the ace is the detective, and they must leave the room for awhile. The person who gets the jack is the murderer, and the person with the queen is the victim. All other persons are innocent bystanders. The players that are remaining in the room after the detective leaves must talk quietly to figure out who has the jack and queen. The murderer "kills" the victim, and the victim must scream. The victim's scream is the cue for the detective to enter. The detective must ask each person to tell about their alibi, including the murderer. The detective must ask each person twice, and the second time around the murderer must change one word in their story. For example, the murderer might say, "I was walking my dog," the first time. The second time they might say, "I was walking with my dog." The detective must try to figure out who the murderer is, and if they guess right, the detective wins. If they don't guess right, the murderer wins.  - JCCN

PUMPKIN PICTURES I take digital pictures of each child making the "scariest halloween face" possible and put into a pumpkin frame (made from orange poster board and shaped like a pumpkin with a hole in the middle for the picture to show through) with the date and the classroom...such as 3rd Grade-1999. Place a magnet on back for the child's refrigerator. What a hoot to see the funny faces all year long in the kitchen. I use this idea also for valentine parties but take a crown for the kids to wear and write on the frame..."King of Hearts" or "Queen of Hearts" along with the grade and date.       Enjoyed your website. Thanks for the good ideas!

Pumpkinhead: Kind of similar to carrying an egg in a spoon, you get medium sized pumpkins (larger or smaller depending on the size of the people). Each person puts a pumpkin on his or her head and when the whistle is blown, you walk (or run if you can) toward the finish line. Whoever makes it there first without their pumpkin falling off their head wins. If the pumpkin falls off even once, the person is disqualified.


Cake, Carved Pumpkin, Cookie or Cupcake Walk
This needs to be done in a  large room.. Put numbers or shapes on the floor, in a huge circle or oval. Ask everyone ahead of time not to scoot across these as it will dislodge them. (you will have to tape or glue to floor) Then put the same shapes or numbers in a bowl. Have everyone line up in a long line and start playing music and have them walk until music stops. The one on or nearest the number or symbol that you pull out of the bowl wins the homemade cake, cookies, cupcakes or decorated pumpkin

Note: You can use a homemade cake, decorated cupcakes and let them win 2 or 3 at a time, already on a plate and wrapped w/ Saran Wrap...you can use homemade cookies and allow them to win 6 already on a plate and wrapped w/ Saran Wrap. You can carve out the pumpkins ahead of time, so that the pumpkin they win is special. Or you can do all four and just line the prizes up on the table and let the guests pick and choose which they want! Have a big plate of cookies available so that if the winners want to continue to play, they can win a single cookie. This keeps everyone involved and playing and lets more win a big prize! And this keeps the game going a little longer!But make sure that the cakes, cookies or cupcakes that you allow them to win are homemade..this just makes the game more special!  ...People of ALL ages loved this game at out former church......they wouldn't play any game until this one started then they all got excited and wanted to join in!

*you must keep your hands clasped behind your waist *the two starters must get their orange across the room and hand off their pantyhose to the next team member.

"Murder" (or "Wink")
One player is secretly designated the "murderer". This can be done by drawing lots: each player draws a piece of paper from a hat. They are all marked "victim" except for one marked "murderer". Prepare only enough for the number of players. Alternatively, the host can secretly tap one player to be the "murderer".
All players must sit in a circle and be able to see each participant's face easily. The murderer tries to "kill" the other players by winking at them. If a player is winked at, he or she must die (as dramatically as possible, of course!. Encourage theatrics!)
A warning to the murderer: wink discreetly. A player who witnesses the crime (and is not yet killed off) can become a "witness". This player shouts "Witness!" and names the killer. If the witness is right, he or she is a winner, and a new round starts. If the witness is wrong, however, that person also dies. A player who has a hunch about the killer, may shout "Detective!" and guess the murderer's identity. Beware! A wrong hunch results in that player also dying.
The murderer wins if all but one "victim" is killed off.

Disclaimer:  All games submitted are to be played at your-own-risk. It is highly recommended that you always have an adult evaluate the appropriateness of the games  and activities according to the needs and personality of your group. There may be potential risk and necessary safety precautions which may be required before you play any game. Media Bridge GAMEKIDS is not responsible, nor has it any control over, the use or misuse of any of the games  and activities suggested on our pages. If you feel any game or activity is unsafe or inappropriate, please let us know and we will evaluate your request
Copyright 1993-2019, 2020  Media Bridge GAMEKIDS. All rights reserved.