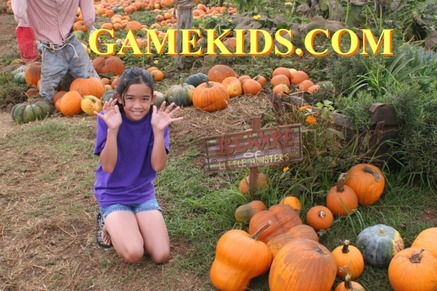 HALLOWEENIES
This one is fun for all ages...set up a table and hot dogs made diffrent ways undecorated for the older kids whod like to make there own and decorated for the younger kids.... using colord ketchup and other things you can decorate these halloweenies...... Quick and Easy.... - Danyelle Scholl

ROLLING GHOST
You will need 8 toy bowling pins, black and white construction paper and ink markers. Put black construction paper wrap around the pins. Then cut out white paper ghosts and glue or tape to the black paper that is on each bowling pin. For your finished touch, make faces on each one. The rule is 1-3 ghost down gets a small treat, 4-8 ghost down gets a bigger treat. You may make up your own rules.

BLUE MURDER (best played with 4 - 8 people)
My name is Audrey and I am 12. Here is my favorite Halloween game its called Blue Murder! This game is best played in the dark outside or inside if you want you can use a flashlight.

Touchy Feely Boxes
You will need 2-3 shoe boxes with lids.  Cut out the corners big enough for a child to insert a hand without looking inside the box and divide the inside of the box into four with cardboard.  In each of the compartments put things in.  They have a pen and paper and have to guess what is inside each compartment (the younger ones can have help from the adults in writing their answers).  My kids love this, I put stuff in like pickled onions (eyes), cooked cold spaghetti (worms), pumpkin innards (yuk), cooked rice (maggots), hot dogs, gherkins, rubber spiders  etc. You may need to put the slimy stuff in margarine cartons in the boxes.      - Mandy

CANDY BALLOON RELAY
Put a small piece of candy in a balloon and blow it up.  Divide the group into two teams and line them up to race.  The first person in line runs down to the bale of straw or hay and picks up a balloon.  Then that person places it on the bale and sits on it to pop it.  If they're a lightweight they may have to bounce on it to get it to pop.  When popped, grab the candy and run back so the next person can do it.  The first team done wins.
- Julie West

GHOST BINGO
Make Bingo cards with the letters GHOST instead of BINGO at the top.  Leave the squares that the numbers would be in blank.  Buy some small halloween stickers that have 6 different objects (e.g. one sticker has a black cat, another has a bat etc.) on each sheet (make sure you have a sheet for each child).  Take two small cardboard boxes and cover with freezer paper (or other type of white paper); these will be the dice.  On the one put one letter in the word GHOST on each side of the box (you will have an extra side which you can leave blank or put an extra T).  Cover with contact paper.  On the other die draw a picture of each of the objects on the stickers on each side of the box.  Cover with contact paper.  Give each child a GHOST card and a sheet of stickers to make their own card.  There is a "free" space in the middle and they can put the stickers in any box (some children can put as many objects in a row they want e.g. there may be 3 cats under the G, that's OK).  Then roll the dice, if "G" "bat" comes up, the kids with a bat sticker under the G can cover it up (only cover up one bat).  Keep rolling untill someone yells "GHOST".  Make sure you have someone keeping track of what is rolled so the cards can be checked.                                                            - Gary & A.J. - T.

SPIDER WEB
In an enclosed area, take numerous, separate and very long pieces of yarn to create a giant spider web. Put a piece of tape on the beginning of each piece and tie a number to the end. Criss cross the pieces of yarn throughout the room to create a "web." Each child grabs a taped end of yarn and rolls it up until the end is found. Each number corresponds to a special prize or treat. The kids will have fun working there way through the web and trying to stay untangled.   Happy Halloween!                               - Lynda from Larchmont

JACK-O-LANTERN
This is a game for 2 to 4 players ages 6 and up.  You will need a piece of paper and a pencil for each player. You also need 1 die.  The object of this game is to complete a drawing of a jack-o-lantern before the other players do.
Players roll the die to see who starts. The player with the highest number goes first. You must roll the exact number to draw each item. Each item must be drawn in order. If you can not draw what you have rolled, the turn passes to the next player. (For a faster game, or for younger players, you can draw the items in any order).

Halloween Round Robin Storytelling Game
This is a super fun game for at least 2 people ages 8 and up. The more players you have, the better the story.   Copy each word form the following lists, on to small cards, about 1" X 2". Each category needs to have it's own color card. Construction paper works well for this. Here are the four categories:

Disclaimer:  All games submitted are to be played at your-own-risk. It is highly recommended that you always have an adult evaluate the appropriateness of the games  and activities according to the needs and personality of your group. There may be potential risk and necessary safety precautions which may be required before you play any game. Media Bridge GAMEKIDS is not responsible, nor has it any control over, the use or misuse of any of the games  and activities suggested on our pages. If you feel any game or activity is unsafe or inappropriate, please let us know and we will evaluate your request